The ProForm range of exercise bikes are popular with users seeking a low impact, cardio workout with the added benefit of toning the legs and hips. Typically they are cheaper and take up less room than other fitness machines and are ideally suited for domestic use.

They are based around the concept of a road going, pedal cycle with the same basic elements of a seat, pedals and handlebars.

The way in which these three key elements are arranged, however, can vary according to the three main variations of exercise bike. These consists of the following types:

These are the models that we have reviewed:

This resembles a conventional pedal cycle with the relative positions of the seat, pedals and handlebars so arranged that the user is able to pedal away on the machine with an upright or slightly forward leaning posture.

The flywheel which consists of a heavy, metal vertical disc is usually enclosed in a casing. The flywheel is connected via a belt drive to the crank shaft on the pedals and it is the pedaling action of the user which rotates the flywheel.

Also in the flywheel enclosure is a mechanism which acts as a resistance or load on the flywheel which the user pushes against. The mechanisms used for this loading are variations of systems using mechanical friction, air resistance and magnetic forces. The resistance mechanism can be operated manually or electronically.

Many upright exercise bikes have built in workout programs and display screens  that can monitor workout stats such as heart rate or calories burned.

This is similar to a racing type cycle and has the seat, pedals and handlebars positioned such that the user is able to adopt a much more forward leaning, crouched down posture than the posture adopted on the "upright" machines.

Another key difference is that the flywheel is heavier and is directly linked to the pedals, such that when the user stops pedaling the pedals will continue to spin in much the same way as on a fixed wheel cycle.

Although usually having some sort of manually operated resistance mechanism, they typically lack many of the features such as built in programs and workout feedback found on the "upright" and "recumbent" machines.

These "spinning" exercise bikes are in fact so similar to a conventional pedal cycle that some serious cycle enthusiasts will use them to practice on if the weather is too poor to venture out onto the road.

This is different to either the "upright" or the "spinning" bikes in that the user sits low down on a large seat in an almost lying down or recumbent position.

The well padded seat typically has a good back  support and the user operates the pedals with their legs stretched out in front of them. This arrangement puts less stress on the joints and so is ideally suited to people who are out of condition or who are recovering from an injury.

The user has their hands held down at their sides and there are no handlebars, although there are sometimes small hand grips that can be
used to monitor heart rate.

The seat can be adjusted fore and aft by sliding on a rail and there are usually features such as in-built workout programs and a display screen offering feedback on the workout. 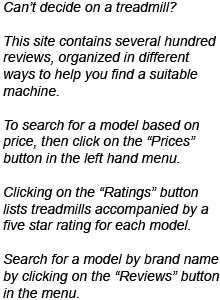